This lawsuit was the fantasy of a lawyer in Ashville, Pickaway County, Ohio. He alleged that my law office was operating a Racketeering conspiracy, had stolen money from my clients, (note that their debts far exceeded their assets) committed malpractice, fraud and he might have alleged that I caused the Civil War. (Ha!) It is now laughable, but he waged a slander campaign that would have made the worst politician proud. These allegations may have provided “cover” for an IRS and/or a Department of Justice investigation listed elsewhere. I believe he hoped to get rich on his fantasy – first that I had done anything improper and second that I had any significant assets. Neither of which were true. Unfortunately some powerful people and organizations appear to have used his slanderous accusations for their benefit. He filed numerous claims of ethical violations with the Columbus Bar Association. As will be shown elsewhere the procedure in the Bar Association was patently unfair. A key witness who I had subpoenaed did not show up for the ethics hearing but the bar panel refused to come back the next day to hear his testimony. The jury in civil case heard the testimony and was clear on the facts. The jury determined that the clients were well represented, no fraud, malpractice or other improper representation occurred. The court had thrown out the Racketeering claim determining that no reasonable person could find in favor of the former clients. Finally the jury determined that the plaintiffs had not paid their bills and awarded approximately $10,000 to me for fees earned while representing the clients. The trial judge also sanctioned the lawyer for frivolous conduct. The part about the plaintiffs’ lawyer qualifying me as an expert is not a typographical error. He really did. 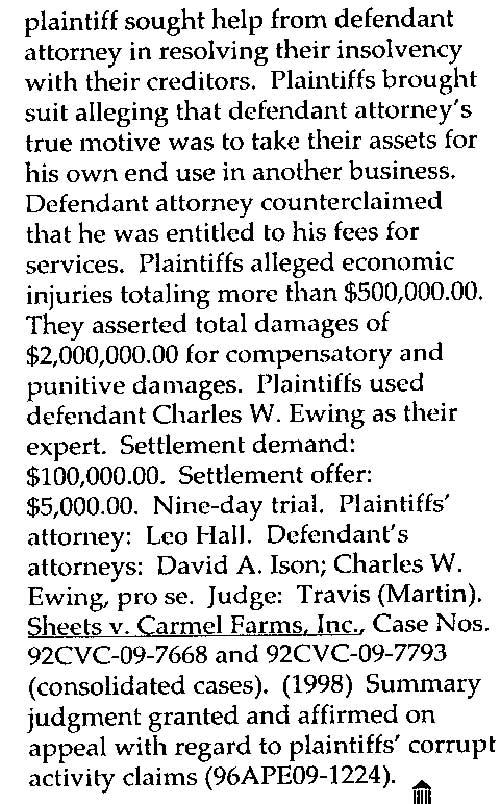